This week saw our Henry Wowler’s least-favourite day of the year: the day he gets poked about by a stranger then jabbed in the neck. Yes, it’s annual medical time!

We heaved his cat-basket into the van with considerable effort, braced for a scolding about his heaviness; and in the vet’s waiting room I read a poster, ‘How to Tell if Your Cat’s Overweight.’ Can’t feel its ribs? Check. Saggy dewlap? Check. Lack of interest in playing? Check – sort of. As soon as Henry learnt to kill things, he went off toys, although he still enjoys savaging his Christmas catnip mouse, playing ‘knock on the patio window then run away when they open it,’ and chasing the odd leaf or twig round the garden; but on the whole, if it doesn’t bleed, he deems it not worth bothering with. Lazy and lethargic – um, how do you tell with a creature that spends 18 out of 24 hours asleep? 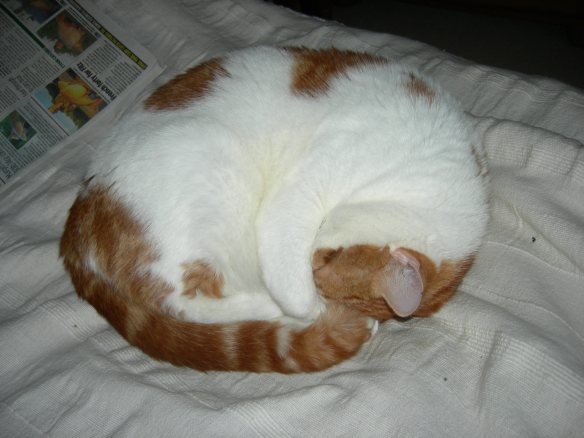 With Wowler, it depends on the weather, (when it’s fine, he spends more time outdoors doing cat stuff ), and whether anyone’s at home, (Mummy and Daddy-cat’s arrival means dinner, irrespective of how early we finish work – cue for him to wake and start prowling round hassling for food). So no check here – I’d call him averagely active for a cat of his age and temperament. Hesitates before jumping up onto furniture? Check. Mind you, Henry does like to consider the pros and cons – often at some length – before he acts, to avoid any taint of slavish obedience when invited to jump on the bed or onto Mummy-cat’s lap for a cuddle. I’m not sure if that counts as ‘hesitation’ – he’s perfectly capable of jumping without it when the occasion demands, and agile enough to make a standing leap onto the kitchen worktops (attested by the trail of small muddy rosettes I find after rainy nights). And he still has a visible (if substantial) waist, and no problems with flexibility or grooming his hard-to-reach areas. How overweight can he be?

We soon find out – 6.9 kilos! Amazingly, despite receiving exactly the same diet all year – a half-tin of meat and two handfuls of biscuit a day, plus his ration of toothy-bics (ie the dental-care type) – he’s gained 500g since his last weigh-in. Oops. Henry Wowler is, once again, officially Too Heavy; although to my great relief, he hasn’t topped his highest weight of 7.2 kg, recorded three years ago. But despite being a big, solid cat, he should weigh nearer six than seven kilos; so we discuss his intake with the vet, who recommends that I weigh the handfuls and cut back to no more than 30g of dry food per day.

OK. Next morning I duly chuck two heaping handfuls onto the scale, nervously wondering how much we’ve been over-feeding him. It weighs 35g. In other words, the absolute maximum he’d get on the rare days he succeeds in whingeing extra breakfast out of Mummy-cat and conning his bedtime biscuits out of both cat-parents, is a paltry 5g more than the vet’s recommendation. I reduce it to 25g, which looks more like his average daily portion. Phew. I’m delighted that we generally give him less than the recommended 30g – but amazed that, notwithstanding, he’s still managed to put on a pound. How did that happen?

Um. I guiltily recall the odd scraps of Spam or chicken he gets off our plates; doesn’t happen often, but that’ll have to stop – as will giving him any chance to steal scraps I put out for the birds. Plus I suspect he recently went through a phase of pinching a feline neighbour’s food, because he kept coming home in the afternoon looking smug and suspiciously fat, (but still demanding his usual dinner). Luckily, if that was the case, I think the neighbour must’ve got wise and either stopped leaving food outside, or started locking the cat-flap when they feed their own cat. And we can’t control the number of rodents he pogs overnight, (or even necessarily know about it, unless he leaves bloody remnants in the kitchen) – but however good the hunting, it never stops him demanding his full daily ration of cat-food. (Perhaps he thinks mice contain no calories, like chocolate eaten in secret).

Whatever, the upshot for Henry Wowler is no more unscheduled treats, and no more than a measured 25g biscuit and 12 toothy-bics with his meat every day. I’ll also try to make him run about a bit more, (although that only seems to sharpen his appetite). Then I’ll keep my fingers crossed that when we take him to have his teeth cleaned in the New Year, the vet will find our amazingly fat cat has shed a few ounces…