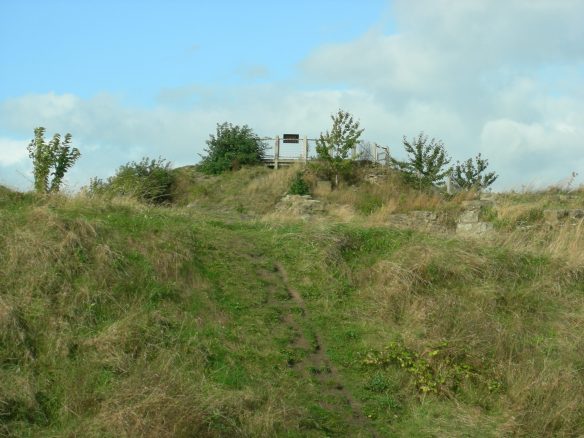 Sandal Castle near Wakefield is well-known to Wars of the Roses history buffs as a favourite residence of Richard, Duke of York, and close to the spot where he and his second son Edmund, Earl of Rutland, met their deaths in battle in December 1460. This, along with its connections to Richard III and its use during the later English Civil War, make the castle a site of local and national heritage significance; and when I published my Wars of the Roses battlefield guidebook Walk Wakefield 1460 in 2011, the place was in fine fettle. Stout timber stairs across the moat and up the motte gave full access to the monument (a couple of years later, stairways down into the moat were added, giving spectacular views of the earthworks), and its Visitor Centre, containing displays on the castle’s history, plus space for educational activities, loos and a shop, was open every Wednesday to Sunday for four hours a day. The site looked tidy and well cared-for, and was a wonderful amenity for the dog-walkers, joggers, local families and visitors from farther afield who came to enjoy its beauty and unique atmosphere (not to mention the bracing winds that always seem to blow there).

Today it’s a very different, and depressing, story. Years of savage cuts to local authority budgets forced Wakefield Council to pare back staffing until the Visitor Centre finally had to close completely; then the stairways to the inner bailey and up the motte became structurally unsound and were blocked off in March this year, limiting permitted access to the perimeter of the monument only.

The consequences were sadly predictable. Lack of access for grounds maintenance means the inner monument is now so overgrown with bushes and weeds that it looks a right mess. Many visitors totally ignore the ‘No Entry’ and warning signs, (or view them as a challenge), and simply scramble or ride mountain bikes up and down the earthworks, damaging the grass and forming highly visible, unsightly tracks. With no staff to warn them off or call the police, they do this quite blatantly; the other day I witnessed several truanting schoolboys climb to the top of the motte, and a ‘carer’ (hah!) lead his special needs charge very deliberately up and down the sides of the moat (proving that some folk really don’t have the sense they were born with). The site has become a magnet for antisocial behaviour, a place for teenagers to congregate at night to booze (leaving their empties behind, of course), intimidate bona fide visitors, and spray their moronic graffiti – yes, recently the stonework was vandalised with purple paint, the work of local yobs well-known to police, who are now bragging about their exploits around the neighbourhood. Most dangerous of all, a group of young adults who should have known better drove a car around the site during the day, putting everyone else present with their children and dogs in danger, and leaving deep wheel ruts in the grass as a lasting trip hazard.

Am I angry? You bet. Who do I blame? Primarily the Government, for consistently starving local authorities of the money to provide essential services, let alone quality of life amenities like heritage (always a soft target at times of austerity). The site abusers: those who lack respect for themselves, for other people’s safety and enjoyment, and for our shared environment and history. (However, I can sympathise with locals whose Council Tax goes in part to pay for Sandal Castle’s upkeep and who are determined to continue accessing the whole site as they always have done, despite the blocked stairways). And for all that I understand Wakefield Council’s financial difficulties, I can’t help feeling frustrated by the flabby, short-sighted, ‘we can’t do that’ approach they seem to have taken, rather than energetically pursuing solutions to this problem. Where is the joined-up thinking? Where is the major public appeal to raise a relatively modest £175,000 to reinstate the walkways? Where is the regional tourism drive to capitalise on the unprecedented levels of national and international interest in the Wars of the Roses since the discovery of Richard III’s remains in 2012? And why is it now falling on unpaid members of the community to kick up a fuss and take action when there are senior and principal council officers receiving good salaries to address issues like this?!

Santa Claus is Coming to Town…

Book Review: Around the Ice in Eighty Years

The random jottings of a woman called Katy

Tales about history and much more

Playing with dolls is not just for kids.

An antidote to literary cardboard cutouts

his story, her story

The latest news on WordPress.com and the WordPress community.